A Taste of the Gilded Age

In the late 1800s, Charles Spofford commissioned architect Ehrick Rossiter to build a Victorian Tudor estate in Norfolk, CT, for his family. The area was becoming a popular destination for New Yorkers to escape the city for fresh air. “The Alders,” as the elegant Gilded Age estate was named, was completed in 1898.

Watch a brief virtual tour of the estate’s unique architectural features and history below.

Charles Spofford was the son of Ainsworth Rand Spofford, 6th Librarian of Congress. Ainsworth was appointed to the position by Abraham Lincoln in 1864 and is said to be the creator of the modern library- he transformed the small reference library that served the U.S. Congress into a national institution that served the American public.

Charles graduated from Cornell University and worked in Boston for a few years before moving to New York City, where became associated with Henry Villard, one of the country’s wealthy railroad financiers. Spofford became a director of the Northern Pacific Railroad, the Milwaukee Street Railway, the North American Company and the Crocker-Wheeler Company. One of the first to see the possibilities of the inventions of Thomas A. Edison, Spofford helped organize the New York Edison Company and the Detroit Edison Company.  In 1900, he went to London as the representative of American interests in the electrification of the Underground Railway, and upon his return to this country in 1905, he retired from active business and moved with his family to Norfolk permanently.

Charles Spofford was married to Ellen Boardman Spofford, and they had one child, Barbara Spofford. In 1905, Barbara was presented at court at Buckingham Palace in the presence of King Edward VII and Queen Alexandra. She attended college in Germany and the U.S. and received the degree of Doctor of Philosophy from Friedrich Wilhelm University in Berlin, Germany, becoming the first American woman to receive the distinction from the esteemed school. Barbara married Shepard Ashman Morgan, president of Chase National Bank.

The stunning architectural details of the estate include a grand main staircase of native cherry wood leading to a landing with three wooden Moorish arches. A bright dining room features a unique English tiled fireplace and exquisite Tiffany stained glass windows. The large Great Room with exposed beams boasts a massive fireplace with a bas relief of one of the Elgin marbles. A baronial library, next to the foyer, has built-in wooden shelves and stained glass. The original master bedroom has a mantled fireplace with intricate woodwork, the original marble sink, and a large westward facing balcony overlooking the rear lawn and gardens.

Ehrick Rossiter was born in 1854 in Paris. His father, Thomas Pritchard Rossiter, was a Hudson River School artist. Ehrick attended the Gunnery School, in Washington, CT, and then studied architecture at Cornell University.

The Spofford’s elegant mansion is now a relaxing getaway for guests from all over the world. Located on 5 acres on a quiet street, the Manor House Inn offers a quiet respite in a beautiful sun room, gardens and private balconies. It’s just a short walk to the quintessential New England town of Norfolk, with a full service restaurant, country store/deli, and artisan shops. Relax in the luxury of a bygone era, and recharge in the natural beauty that surrounds our inn. 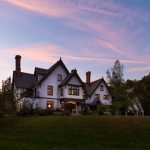 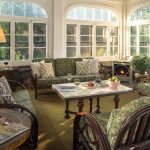 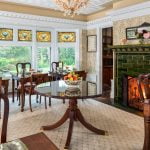 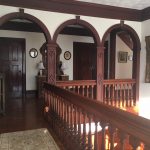 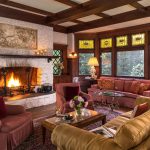